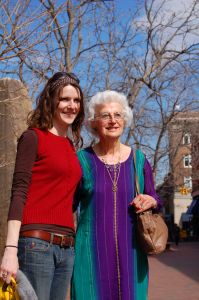 • “In the year since my husband died, my daughter gives me a surprise every month on the anniversary of his death. It might be a candy bar on my pillow or a scarf on the front seat of my car. One month she was out of town and I found flowers on my dresser; she instructed her husband to come to the house on his lunch break so I would find something special when I returned from work. Her thoughtfulness has lightened my heart during this difficult year.”

• “My mother-in-law arrived a few minutes after I returned home from the hospital after my miscarriage. I told her I wasn’t up for entertaining. She told me to rest and she sat by my bed to keep me company. She said nothing all afternoon, just sat by my bed. It was the nicest and most caring thing she’s ever done for me.”

• “The year after my mother died, my husband had surgery for cancer. My kids were teenagers and I had no one to lean on – it was just me and the stress was overwhelming. I spoke to my sister and told her how stressed I was. She told me to call her to vent anytime and said “Just pretend I’m mom.”

• “My husband was terminally ill and my two sisters and their husbands were flying in from out of town for the day so they could see him one last time. My colleagues wanted to help out so they provided lunch - a platter of sandwiches and drinks. It made the day so much easier.”

• “My baby died eight months into my pregnancy. My good friend accompanied me to the hospital where they induced labor. Every year on that date, she sends me a bouquet of flowers.”

• “When my mother-in-law passed away, my daughter’s three roommates drove from college to pay their respects at her wake. They then had to drive back for classes the next day. They did this for my daughter and their ‘honorary parents.’ That was seven years ago and I have never forgotten the gesture.”