Who is eligible for a national cemetery funeral or burial? 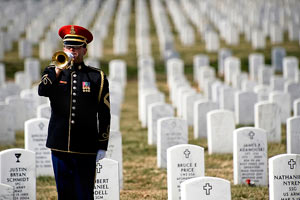 Q. A relative’s husband, a retired officer in the Armed Forces, just died and will be buried in Arlington National Cemetery. I was surprised. I thought only Medal of Honor winners and other heroes are buried in Arlington. What are the eligibility requirements?

A. There are actually 130 national cemeteries in the United States where free burial benefits include a gravesite, opening and closing of the grave, perpetual care, Government headstone or marker, vault or liner, burial flag, and engraved Presidential Memorial Certificate. Eligible veterans, and service members who die on active duty (or on active or inactive duty for training), can be buried in these cemeteries. In addition, the spouse and dependents are entitled to a plot, burial and grave marker without charge. These cemeteries are maintained by the United States Department of Veterans Affairs www.cem.va.gov.

Arlington National Cemetery and the cemetery at the Soldiers’ and Airmen’s Home in Washington, D.C. are maintained by the Department of the Army. Arlington was officially designated during the Civil War as the first national cemetery, although the graves of soldiers from as far back as the Revolutionary War are here, too.

Active duty members of the Armed Forces, veterans retired from active military service, and a long list of others (including recipients of the Medal of Honor, the Silver Star, Purple Heart, and other medals) can be buried here. The graves of two Presidents of the United States—John Fitzgerald Kennedy and William Howard Taft—are here, as well as several Chief Justices of the Supreme Court and Associate Justices. Astronauts, journalists (including one TV anchor man), and others rest at Arlington, too.

About 27 funerals a day take place at Arlington National Cemetery, Monday through Friday except for holidays. A chapel service can be requested. For further information, see the Arlington website at www.arlingtoncemetery.org

There are also state veterans cemeteries in many states. A list of them plus contact information is available at the Department of Veterans Affairs website www.cem.va.gov.

If the service member or veteran is buried in a private cemetery (near the deceased’s home, for example) the family is entitled to the Government headstone or marker, burial flag, and Presidential Certificate. There may be a burial allowance in certain cases.

You can call your regional Veterans office at 1-800-827-1000 and/or numbers available at the websites mentioned above for more detailed eligibility requirements and other information on burials.