The Holidays are soon to be upon us.  To some of us it is a time to remember those we lost; those that left us either through illness, accident, or other method.  This is my second Holiday Season without Tim.  I walk through the toy stores with my daughters, having them pick out what they want Santa to bring and rush the item over to the “Santa Scanner.”  It’s the price check-scanner, reading the bar-code and displaying the price.  To the girls, it scans the item and sends off a message to the North Pole that gets printed out for Jolly Old Saint Nick.  It’s something that was started when Timmy was little and was used to calm the “Give Me” and “I Want” tantrums. 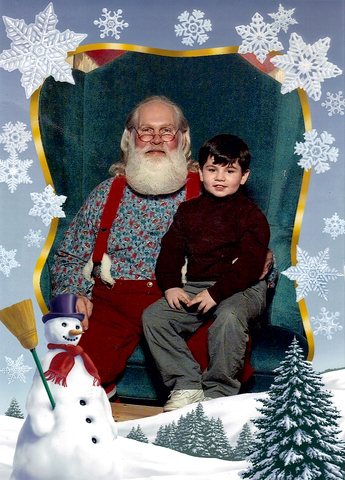 The exception was that I would have to make a mental note of the toy; now I take a picture with my cell phone.  Alaina, my oldest daughter, is quick on the pick-up – I can certainly say she has a natural knack for deduction.

“Daddy,” she would ask.  “If Charlotte and I are scanning the toys on the Santa Scanner; why are you taking pictures of the toys too?”

“Uh,” I thought of the Grinch and Cindy Lou-Who.  “If the Santa Scanner printer gets jammed up or runs out of paper, I thought I could send it off to Santa from my phone – just in case.”

“But Santa doesn’t bring grow-ups toys.  Why would he want a picture from you of girl-toys?”

Okay, I have this under control.  Sweat beaded on my brow.  I could feel it break out on my chest and underarms.  “Because Maas, Santa knows I have two little girls at home.”

“Does Santa know Timmy is in Heaven?”

“Do they have Christmas in Heaven?”

What to do? What to say?  I tried not to look into her eyes; I didn’t want her to possibly see the pain or the uncertainty.

“Yeah, I am sure they have a big birthday party for Jesus.”

“With cake and ice cream?”

“I am sure they do.  I would think they have a cake that is every kind of cake.”

The girls rushed off down the doll aisle – Monster High, Barbie, Winx, Novi dolls.  Next the ornaments and gift wrap.

“Daddy, can we pick out what wrapping paper we want Santa to put our presents in?”

Charlotte would quickly reinforce the question: “Can we pick out the paper?”

They went through the rolls of paper.  My Little Pony and Hello Kitty paper were dunk into the cart like they were miniature Michael Jordans.  They froze looking at the ornaments.

“Daddy,” they exclaimed in unison.  “Look its Spider-Man!  It’s the new one from the movie!”

“Should we get it for Timmy to be on our tree this year?”

I walked down the boy stuff, with the girls in tow, looking at the action figures, the collectable figures, Hot Wheels, Nerf guns and swords.  It wasn’t so long ago; Timmy and I would each grab a Nerf Sword or a toy Light Saber and have a sword fight.  To us we were Jedi Knights dueling or modern Ninjas stalking each other as prey.  To the outside observer, I guess we appeared more like Inspector Jacques Clouseau and Kato from the Peter Sellers’ Pink Panther movies – sometimes wreaking havoc knocking over a display here or there much to the disdain of the aisle attendant or store worker.  Other times, I would be in trouble with Gi for giving him a wallop on the noggin with the heavy foam sword blade or green or blue tube of a light sabre.  Sometimes it was because I snuck up on him before he had the chance to get the same idea.

As we passed the Marvel superhero action figures, masks of Iron-Man, Captain America, Spider-Man, and the Lizard were displayed.  Charlotte asked to try each one on and take a picture of her wearing each.  I remembered when I didn’t have a decent job and bought toys that were red tagged and discounted; Timmy’s stocking filled with half-dozen Hot Wheels.  So much had changed since Tim’s first Christmas and the present.  Some for the better; some changed for the worse.  The worst being that the boy stuff haunts me like Jacob Morley’s ghost warning me of being fettered by the chains and ledgers of life.

At the front of the Toys R Us, stood two Marines – a Sergeant and a Lance Corporal, collecting for the Marine Toys for Tots Drive.  I thought of the Christmas when Tim was five or six.  A Marine was standing in front of the Kay-Bee Toy Store at the mall.  Tim asked why the Marine was guarding the toy store.  I explained he wasn’t; he was collecting toys for kids that may not have a mommy or daddy, or their parents may not be able to afford to buy them toys.  Tim asked if he could give the Marine a toy because he didn’t want another kid to be without a toy.  I told him he could.  He went up to the Marine, handed over a Batman action figure for the toy drive and a Coke for the Marine.

“My daddy said you can’t drink it now ‘cause you might get in trouble with your boss.  He said you can drink it when you go eat lunch.”

The Marine was gracious and thanked Tim for both the toy and the soda.  It was one of those occasions that should have been photographed.  I wonder if that Marine remembers his Christmas soda.  I wonder if that toy is still played with by the recipient from the toy drive.

This Christmas there will be a toy given in Tim’s memory.  No one needs to know its origin as it is mixed in with the daily collection by the Marines; just a simple toy given with the love of a boy I love more than life itself as I love his siblings.

CAB updated their profile
19 hours ago