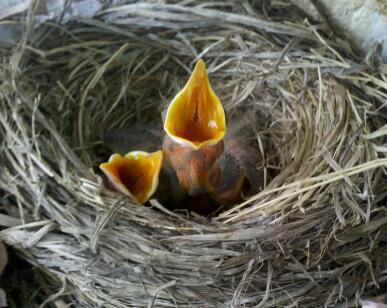 For many years, I have had a tin basket with artificial flowers hanging on the brick wall outside our front door.  On many occasions there has been a bird snuggle up in the flowers in the wintertime, which would come flying out and scare you, as you came to the door.  I know I should have removed it long ago, but it was a housewarming gift from my sister in law, so I never removed it.

After both of my grandchildren were born, and my son would bring them early in the morning for me watch while they worked, I started calling them my Three Little Birds.  Obviously, from the Bob Marley song of the same name.

When we returned from the hospital, after Rocky passed, a bird had actually built a nest in the basket.  On top of the flowers, but snuggled in to withstand weather.  It was 4 days before the funeral.  The bird continued to work on strengthening her nest during this time.

On the day of the funeral, she had laid 2 eggs and just a few weeks later they hatched.

It was quite exciting for all of us.  I felt it was a sign from him.  Three Little Birds outside on my front porch.  He knew I would understand that ‘connection’.

Hummingbirds, butterflies and dragonflies were always a favorite for us all, with Rocky’s children.  There are so many butterflies around here, that seeing one, or ten, would not have been any big deal.  But, dragonflies?  Well, that was actually a rare thing to see.  And the only time I seen a hummingbird around my feeder, was when Rocky would spy one there and point it out to me.

Not long after he passed, hummingbirds started lighting on the feeder.  Three at a time.  Then, the dragonflies came…

They were very playful and let Rocky’s daughter, only 5 years old, at the time, put them on her finger.  She could get her face up really close to theirs!  There would always be three at a time!   We also had pond lilies start blooming in abundance that had not did anything but leaf in 5 years prior to his death.

I was able to get many pictures of these things that happened.  I am in no doubt; whatsoever, that somehow; someway, my son came to us in these ways.