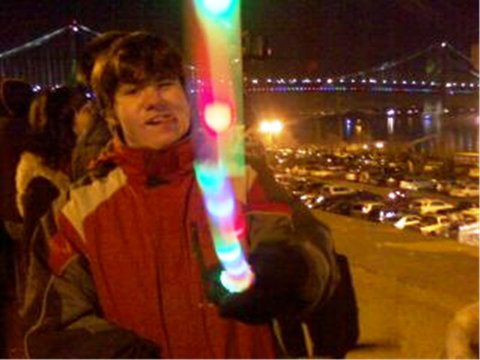 There memories of my children that are stored, put to the back of my mind…not forgotten; just simply tuck away like a winter comforter that when the chill of missing or grief comes to clawing its way in like a harsh North wind keeps me warm and snug.  Perhaps one memory isn’t so different.  It’s a memory of seeing my son take on responsibility and earn the trust that was bestowed on him.

Last December, Gi and I went to a Christmas dinner that we purchased tickets to attend.  We questioned who would watch the kids and decided since Tim was now fifteen years old he was old enough to watch is younger sisters.  Tim promised not to disappear into his boy-cave – his bedroom and enter the world of PS3.  He was given a set of instructions, such as bedtime, when to answer the phone, not to answer the door unless it was the Pizza-Man, and above all not fight with his then one month shy of five years old sister and two-year old sister.  I told him it would be a losing battle – they’re girls.

During the dinner both his mother and I checked on him periodically.

Then the phone calls started to come from Tim.

“They’re not listening.”  He would grumble.  “When are you coming home?”

I could hear the frustration in his voice.

“Did you put on something they would like to watch?”  I suggested different ideas.  “Did you just curl up into a ball and let them beat you down?”

“Ha ha Daddy.”  Tim growled.  “No, I tried Nick Junior.  I tried the Disney Channel…they wont listen to me.  Alaina keeps saying ‘You’re not my father.’”

“Yeah, I suppose.” He said as he hung up the phone.

As close to that hour deadline as humanly possible, Gi and I came home.  I opened the front door, the living room showed no signs of destruction – at least not readily visible.  I looked behind the vestibule door and saw the kitchen broom.

“Why is that here?”  I asked Tim as I was noticing white flaky stuff on the carpet.  “What is this?”

Tim looked embarrassed.  “Well…I had to kill a bug.”

I looked up to the ceiling.  There was a hole in the ceiling about the diameter of a quarter surrounded by several circular and crescent shaped dents.  What was he doing mapping the phases of the moon?  “Why is there a hole the ceiling?”

“The broom.”  Tim went over to the vestibule door, picked up the broom, and held it up with one hand and pointed with the other.  “I mistakenly used the wrong end.”

“How big was this bug?  Should I call the police and tell them to be on the look out for a giant bug?”  I looked at the hole.  I went to the front door and opened it, looking up and down the street.  “Did you get it?  I mean I hate to go back out and the bug comes back for revenge.”

“I’m sorry.  Do you have to bust my balls?”  Tim was getting upset.

“Yes, I do.”  I laughed.  “I’m your father and I have to know these things in order to protect you.  I don’t want a giant bug coming back and eating any of my children.”

“Tim, I’m just teasing you.”  I grabbed him by his ear as was our custom.  As Tim got older he didn’t like to be hugged by me.  I guess someone teased him about giving his dad a hug.  Funny though he still gave me a kiss good-bye when I would drop him off at school.  “I wouldn’t have noticed it if you vacuumed the floor.  I could have blamed your mother.”

The next day the girls told me about how their brother had killed a big bug that tormented them from the ceiling.  Tim described it as a thousand-legged; the girls described as something large and ferocious.  I thought of the giant bugs from Starship Troopers.  If you had seen the movie Neil Patrick Harris is in it and lives entirely by a different set of Bro-Code rules.

But from that night after Tim was a hero to his sisters.  I know they miss him.  This is one of those memories I pull out and wrap myself up in and smile.  I’m tearing up on the outside, but I am chuckling on the inside with a smile of pride that I could trust my son.