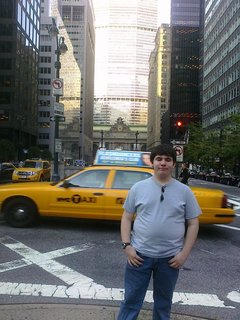 Tim and I left the Empire State Building and began to walk around Mid-Town Manhattan.  Near by was a comic book store and we were attracted to the display of comic book hero porcelain bisque busts, toys, t-shirts and stand-up cut out displays of Spider-Man, Boba Fett, Han Solo and a few others.  We went into browse, finding other treasures I wish I had the money to purchase.  It broke my heart to deny Tim the items he was looking at and holding in his hands.  He understood, but it never changed my disposition.  I never denied Tim any book – comic, illustrated, or printed word.  He loved to read, and if he really got hooked on a series of books he got each and every one in the collection as best as possible.  He held a copy of a graphic novel for Evil Dead, based on the film that starred Bruce Campbell.

We left and continued to walk.  Soon we were a few blocks from the Flat Iron building that doubled as the Daily Bugle in the Spider-Man movies.  On the street were metal cast statues of people and we spotted one on the top of the triangular building.  I took a couple of pictures of Tim standing in front of the Flat Iron.

I stopped and pointed up and asked “Do you think that’s him?”

Tim laughed and reminded me a new Spider-Man movie was in production, but was disappointed that Tobey Maguire would not be in it.

We were both getting a bit winded and started to feel hungry.  Tim said that he would rather wait until we were on our way home to eat.  He asked if we could get something to drink and soon we stopped at a CVS on Broadway and then continued to the trek back to the car.

When we got to Lexington Avenue, I asked Tim if he still wanted to see Grand Central Station.  He looked up at the Met-Life building that loomed over the rail station.

“Hey Daddy, wasn’t that building called something else before?”

“Yeah Monk; when I was little it was the Pan-Am Building.”

Again we stopped for a few more pictures and started towards Grand Central Station.  Once inside Tim thought it was cool that there is a shopping area, like a small inner-city mall, and then we went to the grand hall.  He observed that it was the same as in Superman and in his Spider-Man games.  He loved the feel of the building and the commuters bustling to train platform as the arrival or scheduled departure time was announced.  As we walked around he saw a large chalk board on a distant wall.

“When I was little my grandparents would sometimes take me to see my Uncle Jackie or Aunt Rose.  There used to be a guy that would still write in chalk the times for trains on that board.”

We walked out of Grand Central Station and began to walk.  I thought we were heading back in the direction to the parking garage, but Tim noticed we weren’t and told me.  After another block or two of walking because I was unsure and wanted to find a familiar street level landmark, we turned around.

“It’s all these Starbucks that are confusing me.”  I said to Tim. 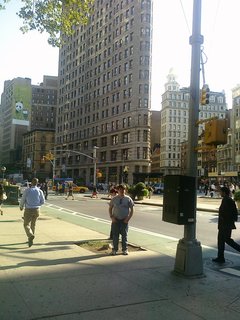 He laughed, “Why the hell do they do that?”

Finally we found our way back to the garage, paid for the ticket, and headed back home.  We drove uptown toward Central Park.  We drove past the Dakota Apartments where John Lennon had lived.  I told Tim I would love to take him to Strawberry Fields.  He knew it was a memorial to Lennon.  He thought it would be a good idea to try next summer.

It was a good day.  It was one of our last true father-son adventures.  We would return to New York in mid-April 2011, which was our last adventure.  We never got the chance to go to Strawberry Fields.