Stories on the Gravesites 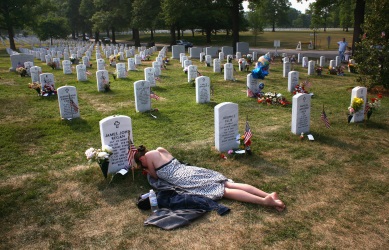 The media coverage of Memorial Day was, as always, filled with poignant images of loved ones and friends visiting grave sites of veterans who gave their lives for our country. It is always moving to see them salute, place flowers, tidy the sites, pray, smooth headstones with their hands and sometimes even speak to the departed, reliving memories, regretting that there weren’t more.

Several years ago, The New York Times featured a Memorial Day photograph on the front page of a young woman, Mary McHugh – shoes kicked off, water bottle nearby – lying prostrate on the ground in front of her fiancé, Sgt. James Regan, an Army Ranger killed in Iraq in early 2007. In its stillness and anguish, it spoke volumes of silent sadness. The image has never left my mind or heart.

People evidence a wide range of feelings about visiting gravesites, from feeling nothing at the foot of a headstone to being filled with a sense of connection with the location where someone they love is buried. As families have become more spread out, “family plots” are more dispersed than they used to be, making it harder to make a graveyard a destination.

Just last week, an Anderson Cooper interview with actor Liam Neeson on CBS 60 Minutes included some very personal revelations about dealing with death, and these disparate views emerged: Cooper said he had visited the graves of his father and brother “probably once” in 20 years; Neeson, on the other hand, said he frequently visits the gravesite on the Connecticut property where his actress-wife Natasha Richardson was buried after she died in a skiing accident. He told Cooper he has planted daffodils and roses there.

Several years ago, my brother, sister and I toured graveyards where our grandparents and parents – or their ashes – are buried, and it prompted a lot of conversation about family history, unforgettable characters and skeletons in the closet. We did feel a spiritual closeness just by being “on site.” We used to take plants and shrubs to the historic cemetery in Old Saybrook, Conn., to keep the graves looking cared for, but now we more often go with clippers to cut back decades of growth that tries to obscure the headstones.

My husband’s parents’ ashes are in a memorial garden of an Episcopal Church; whenever we’re there, he rubs his fingers over their engraved names in the plaque listing everyone who is buried there. I have a friend who sobbed the first time she visited her mother’s grave but, more recently, I was able to have more of a chat with her, even asking her opinion about something that would have been off-limits when the mother was still alive.

Numerous online blogs discuss the pros and cons of visiting gravesites – some of them asking: What is the right protocol? Answers come streaming in: There is no “right protocol” – it’s a personal and individual preference depending on inspiration and motivation.

Other bloggers recount insights and details about their own visits. Some people admit to feeling guilty if they don’t go, but too sad if they do. Some use the visits to have those conversations they were never able to have before the deceased died, sometimes finding resolutions to sticky situations.

In one blog a husband said he sometimes drives by the cemetery where his wife his buried, rolls down the window and calls out: “Hi, Honey!” Another neatly wrapped up what could be a one-size-fits-all approach: “My guess is that while it may be difficult to visit the site, you will feel the angst relieved once you have done so. It would seem there is less harm in visiting the site than not. Just my opinion…”

According to Wikipedia, the federal holiday honoring those who have died in service (Veterans Day, in November, honors all who have served their country) is a time when many cemeteries feature U.S. flags on the graves. But the numbers of cemetery visitors seems to be dwindling. The Huffington Post reported that surveys indicate fewer than 5 percent of Americans plan to attend a parade, be part of a memorial service or visit gravesites “on what was originally called Decoration Day for its tradition of putting flowers on graves.”

Vincenzo D’Angelo is now a member of LegacyConnect
6 hours ago
Welcome Them!