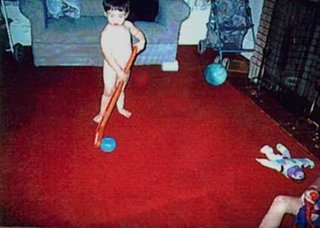 I was working one day in the summer of 1999; I was on patrol with my partner.  I was a year out of the Police Academy.  In my uniformed hat I had a photo sticker of Timmy.  It was about an hour into the tour when I suddenly felt sick to my stomach.  I felt as if I was about to vomit.  I didn’t know why; this was new – I never felt this acute and sudden wave of nausea.  I asked my partner who was driving to turn us back to headquarters.  When we walked into the foyer, adjacent to the operations room, one of the female officers, Jill, called out to me.

I turned to her and walked to her desk.  She was holding up the phone receiver.

“Your dad called and need to call him back.”

“Okay, I will in a second.”  Before I finished my sentence, Jill handed me the phone and it was ringing.

There was a brief pause, and then he resumed.  “Timmy is at the hospital.  Gigi is with him.”

“What hospital?  Why is Timmy in the hospital?”

I hung up the phone.  My sergeant looked at me and told me to go.  I drove quickly up I-95 to the exit and then to the hospital.  I pulled into the ER lot and walked in to find Timmy with his mother.  Timmy was wrapped in a sheet and it was covered in blood.  Under the sheet he was only in his underpants.  I opened the sheet and saw the wounds.  One bite to the chest, one to his right arm, and one to his right leg…I saw the pale yellow underlying baby fat and torn skin.

“How did this happen?”  I looked at his mother.  Timmy was crying.

His mother looked at me.  “You know the guy down the street that has the German Sheppard?  It was his dog.”

I stood back as second.  “This happened on the street?  Was he walking the dog?”

“No,” Gi continued.  “I was in the yard with Timmy and the boys from next door were sitting on the wall.  The phone rang and I asked them to keep an eye on Timmy.  When I went out to the yard, Timmy was gone.  I went out front and the lady from down the street was bringing him up.”

I picked up my crying son.  “How did he get out of the yard?  We have a five foot wall.”

“The boys were shimmying up the laundry pole and climbing up on the wall.  I guess either they helped him up or he watched them and did the same thing.”

There was a uniformed cop there who transported Timmy and Gi.  He was finishing up his notes so he could write the report.  “You know the guy your wife means?”

I went with the uniformed officer to show him the house the dog belonged.  The guy inside said and swore up and down that his dog didn’t bite anyone’s kid.  However, the guy’s own son was studying to be a minister.  The son interrupted and said that he did see a little boy by the backyard fence from an upstairs window.  He knew the dog was in the yard and went down to the back door; he then heard the dog bark and growl and the boy scream.  He went outside but the boy was gone.  The uniformed officer then asked the man if the dog had his rabies vaccination up to date.

The guy said “I ain’t saying anything more without my talking to my lawyer.”

The uniformed officer finished writing the report and commented how much of a jerk the guy was.  Well “jerk” wasn’t the term that he used.  I was taken back to the emergency room to be with my son.  When I got there the doctor explained that Timmy would be better treated at St. Christopher’s Hospital; he was considering the fact that the dog bite wounds were cleaned and bandaged – but he wanted to make sure that Timmy wouldn’t need an overnight observation and other pediatric care.

We wrapped Timmy up in a fresh sheet and brought him to the children’s hospital; the doctor had called ahead.  Once there the wounds were examined again and the doctor made sure there was no muscle damage or puncture of a lung.  The doctor’s only concern was that the rabies shots that we did not know if the dog had.  As a prophylactic measure, Timmy had to come back for nine weeks for vaccination shots; luckily the new vaccination was intramuscular shots rather than the old method of having to pierce the abdominal wall to the stomach lining.

I called my lawyer and sued the neighbor and as a measure that his dog, which I learned later, was trained to attack “anything” was put down.  The dog was a weapon, period.  It was that or I do as I contemplated and give the animal some anti-freeze laced hamburger meat.  The neighbor’s homeowner’s insurance settled out of court.  In fact, the neighbor approached me and said “You’re suing me?”  Well yeah.  The neighbor soon moved off the block and had disowned his son.  Timmy’s scars grew smaller as he grew older and bigger.  He was never affected to have a fear of dog’s which to me was good.

As I write this I feel the anger I had at that moment in time; I feel the fear of losing my son – I never thought I would ever lose him at all.  I feel the wave of nausea in the pit of my stomach boil up to my throat.  The feeling of helplessness and despair.

Cheryl McIntosh is now a member of LegacyConnect
7 hours ago
Welcome Them!