The Mystery of the Coins 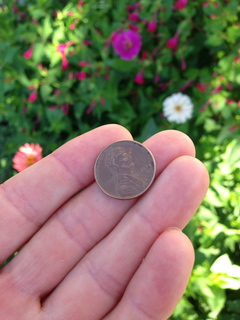 I can still remember when I figured out the coins I found were because of my deceased father. It was about a year after his death and my then-husband and I took a trip to Florida. We were staying outside Orlando and dividing our time between Disney World and Ft. Myers Beach. The morning we were leaving, I walked out of the motel to put some things in the rental car when I spotted a penny on the pavement. Next to it was a hazelnut.

Growing up, we always had nuts around Christmas (the kind you had to crack, not the lazy way I buy them now already shelled in a bag) including hazelnuts. Dad was big into gardening and trees, once announcing to a new neighbor that he was the "neighborhood arborist," and we had a hazelnut tree in the backyard.

While we were waiting at the airport to board our plane to return to New Mexico, I found another penny. I'd never found coins before and now two in one trip.

Now I find about one a week, sometimes more. People think that because I find so many coins that I am looking down all the time. On the contrary, it's when I am not looking for them that I find them. My mind is usually focused on something else when I spot one. A few times they have been 1975 pennies, the year my deceased sister Denise was born. I know that those coins are from both of them, letting me know they are both with me. This past weekend I found a 1971 penny – the year that I was born.

What I don't know about the coins is what they mean. They could simply be my dad letting me know he is with me. I have a tendency to believe it's much more than that, and it's hard for me because living with the mysteries of life is a challenge for me. I want to know what's going to happen; I want to know what everything means.

I do know that they aren't coincidence. The times that I think they are, something always happens to whack me in the head and remind me that there is no coincidence. Everything, good, bad, and otherwise happens for a reason. While I often wish that a sticky note could be attached to each one that tells me what they are for, I know that's not reality. Life is about trusting and having faith.

Ultimately, the best part about finding them is simply that. I post the findings on Facebook and Twitter. I once thought I would stop because I it seemed kind of boring, but people tell me how much they enjoy reading about my findings. It reminds them of the mysteries of life and brings them happiness and hope that there is more to life than what we see around us.

my mother found dimes after her dear brother died and found them for  about a year after...

Michelle, your penny story is beautiful and I believe they are from heavn, pennies from heaven.
And the years mean something special too..as if to say "these years are special to me”(from your beloved father).
I lost my boyfriend of 11 years last April and have been terrible grieving and cannot seem to accept it yet. I feel alone and hopeless in the sense I will ever be happy as that again because we were so close. He wanted to marry me but I wouldnt because I got sick and was embarrased, but he remained devoted to the end. After he passed, I saw 3 deer crossing a busy street on my way to work, and there are never deer there!Ive driven past there for years! and then I also saw 3 “American Robins” out my bedroom window. I feel they were all signs from Barry that he is with me. I also believe the passage in the Bible that LOVE never leaves us and we are never seperated from love (we love family, we love God) and GOd is love! Andn that “love endures ALL THINGS” (Leaving this world, and beyond). I find comfort in knowing that when Im gone too, my love for my family and friends, is forever....

I think we need things to hold on to and God gives us these tender mercies until one day we understand it more clearly.

same happen to me when my father died   like 20 years ago , pennys  every time I walk or  bend down  to tie my shoe . dimes  also and then now as my son pass  on july 4th of this year ,   my daughter and  I have found pennies  as we  go on day by day  talking to each other about my son Lorenzo  ,  to me its a good thing  an I  think  it great for all people to have this happen to them  !