The pain of losing a pet 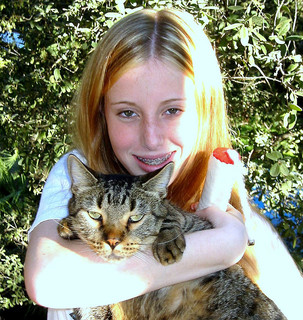 For many of us, our circle of loved ones is not limited to humans. Often, we love our cats, dogs or rabbits as intensely as we do our dearest human companions. Our beloved animals are fast friends, part of the family. When my four-year-old tallies who's in our family, her list always includes 4 girls and 2 boys. That two of the girls use the litter box rather than the potty is irrelevant.

Given pets' importance in our lives, the grief we feel when a pet dies should come as no surprise. But often it does. And while society has rituals and systems to help people cope with a human loved one's death, there may be little support when an animal friend dies. In recent months, we've come across several good articles related to pet loss and grief, and we wanted to share them.

Grieving for pets and humans: is there a difference? The New York Times posed this question recently when they highlighted a Washington Post story, The death of pet can hurt as much as the loss of a relative. The Washington Post's Joe Yonan reflects on the death of his dog and his attempts to understand why his pet's death hurt so much and was harder to cope with, harder even than the deaths of his father and sister. Like many grieving for a beloved pet, Yonan was surprised by the intensity of his feelings and felt shame that his grief for an animal was so strong.

Author Jon Katz echoes these sentiments in his book Going Home: Finding Peace When Pets Die: “I did not want to be one of those silly people who lost themselves in the lives of their dogs or cats," wrote Katz. But when his dog died, Katz's grief was strong. As he researched his book, he found he was not alone. According to The Columbus Dispatch, "Veterinarians told [Katz] they were seeing people experience ever-greater levels of mourning and emotional issues upon the loss of their pets." So why this intense grief?

"[W]hen they realize that the difference is the pet gave them constant companionship, and there was total dependency, then they start to realize that’s why they’re grieving so intensely,” says Sandra Barker, the director of the Center for Human-Animal Interaction at Virginia Commonwealth University. Yonan agrees:

I spent so much time taking care of Red, and Gromit before him, that when each one died it didn’t merely leave a hole in my single-person household; it was as if someone had rearranged my life, excising without my permission many of the rituals that had governed it.

Many Washington Post readers shared their thoughts about the pain of losing a pet.

There’s only been one other time in my life when I’ve cried as deeply and as much as when my dog died . . . and ever since then, I haven’t been able to have another.

I’ve lost my parents, my husband, my only sibling, but the loss of pets remains in a way only other pet lovers can understand.

I’ve met few people who truly understand the complex emotional attachment we have to our dogs, or the depth of grief over their loss.

If people who do not care to have pet companions can understand that a person who loves an animal enough to deeply mourn its passing does not threaten the bereaved’s ability to also regret the passing of a human life, then we can all be more compassionate.

So what can you do when a beloved pet dies? How can you cope? Times Colonist contributor Adrian Chamberlain approaches the subject with levity in Grieving for a pet may involve fudge brownies. Though his take is tongue-in-cheek, he does offer a few good suggestions, culled from pamphlets provided by the Pet Loss Care Memorial Centre in Victoria, British Columbia. Recommendations include "eat something" (ah, comfort food) and "cuddle something furry" (like a stuffed animal). "Cry" and "take the day off work" are also sound suggestions.

As with any loss, remember to take care of yourself. And give yourself permission to grieve. If your live-in companion of 15 years dies, you are bound to feel enormous grief. That she used the litter box rather than the potty is irrelevant.