While I stood over Tim, as he was laying on the gurney, I turned to see a priest and an older woman standing off to the side behind me.  The priest, a short man, about my height of five foot-six inches, dressed in black with the exception of his collar.  The woman, dressed in professional attire, appeared to be out of place in the Emergency Room.  I didn’t know them.  I didn’t care to know either of them.  I assumed the priest was the hospital Chaplin or a Catholic priest called to the Emergency Room from the neighboring parish to provide comfort.

I cut him off.  “Father, I work in a world filled with vengeance. I want my due.  Is God going to give me that?”  I turned back to Timmy’s body.  I noticed the faint, almost brush strokes, like the rubbing from a cloth that had wiped away a copious amount of blood.  His eyes, once so full of life, now dulled and looking to nothingness – the staff tried to close his eyes.

“I don’t want your comfort,” I growled at the priest.  I don’t remember exactly if I used any explicative language or what words spewed from my mouth after.

The priest took a step back and turned slowly on the ball of his foot.  I heard faintly a blessing and a asking of God to watch over me.  I wanted no comfort from my faith.  I wanted no prayer to be said.  I stood at this gurney looking down at my son’s body. God stopped Abraham before Isaac became a burnt offering…Jesus made a decision to be crucified to save mankind, against his Father’s wishes and Jerusalem shook with earthquakes and thunderstorms.

“Forgive them…because they do not know what they are doing.”  Isn’t that what along the lines of what He said with his dying gasp?  Just days before He was hung on the cross, He brought his friend Lazarus back who was four days dead.  I wouldn’t be afforded such luxury.

I thought of Tim’s First Penance.  After he received his sacrament the parents were invited to do our own confessions. I went into the confessional; Father Moriarty sat on a chair.

I blessed myself.  “Please me Father, for I have sinned.  It has been a long time since my last confession.”

We went through the ritual of the confession.  I explained that I work most Sundays and haven’t attended Mass in a long time.  I explained I was a cop.

“So you can’t go to church all the time because you’re doing God’s work?”

About ten minutes later I exited the confessional.

Timmy stood next to his mother.  “Daddy, what took so long?  What did you do?”

A vigil began at Archbishop Ryan.  Students gathered at the front of the school, organized by their own concerns and sense of community.  Mr. McArdle, the president of the school broke the news to the students about Tim’s death.  The news media hovered overhead and among the students.

I was still at the hospital. I didn’t know who the priest was and at that moment I didn’t care.  My son was dead.  I wanted someone to pay for his death.  I wanted someone’s head on a stick.  I cursed God. I cursed the throne, choirs, and principalities of His Angels.

Over the next few hours, pages appeared on Facebook wishing Tim a speedy recovery…to condolences and prayers for him.  A second vigil was planned by the students and announced on the pages.  Some other students from other Archdiocesan high schools asked if they could attend.  School rivalry dropped for the good of community; youth facing the uncertainty of their mortality. 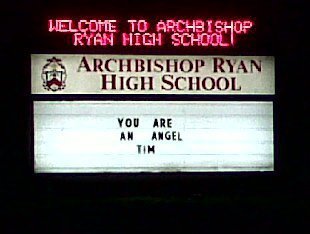 Gi went with her sister. Jun drove me.  It began to rain.  As we got closer to Archbishop Ryan it began to rain heavier.  As we entered the grounds of the high school, the sign at the front of the school read “TIM YOU ARE AN ANGEL.”

“I know brother.”  Jun drove us at a slow pace.  We got out and walked to the front of the school where the chapel is situated.

I could feel the wind kick up a bit more.  I walked to the chapel.  Gi was standing next to the priest who was leading prayers by saying the Hail Mary.   I was told that one of the priests from the school stayed with Tim, gave him Last Rites, and followed him to the hospital with the principal of the high school.  I shuddered that I chased out a man and teacher that cared so much about my son.  I felt ashamed.

The Lord is with thee,

Blessed is the fruit of thy womb, Jesus

The priest dressed in a black overcoat the collar turned up against the rain, a black Fedora adorned his head.  As it got darker, I couldn’t make out his face.  His voice was familiar.

Oh no, I thought, please don’t tell me I cursed out this man!

The vigil ended a short time later.  I walked to the priest.

“It’s okay, there is nothing to forgive.  You have enough to worry and think about.”

I was the prodigal parent.

Comment by Tami on July 25, 2016 at 3:31am
Martin, I come and read this page a lot, I feel your pain, I can feel it in the depths of my soul.... I love you, your compassion and your bravery. You are my forever friend, my evil twin, my soul mate in our tragedies.

Comment by Tami on November 4, 2012 at 4:33am
Oh Martin, you write from your soul...keep writing, you have a gift, I feel the pain and anguish in your words. Giant bear hugs!